Posted on March 18, 2017 by yosaku
The next stop on my Song style fact-finding trip was to another teacher in Tianjin called Yu Chunhai. Although both Che Qiang laoshi and Yu Chunhai laoshi are both from Tianjin, they come from slightly different branches of Song style, as Yu Chunhai’s xingyi comes from Li Xuzhou, another disciple of Song Huchen who was previously profiled in this blog.
Yu laoshi comes from an area of Tianjin (Liu Kuai Zhuang) which was a hotbed of martial arts, and xingyiquan in particular, in the early 20th century. Famous xingyi masters such as Li Cunyi, Xue Dian and Shang Yunxiang all lived and taught for varying periods of time in Liu Kuai Zhuang. Growing up in this kind of area, and the fact that Yu laoshi has practiced both Hebei and Shanxi styles of xingyiquan gives him a unique perspective on how martial arts were taught and practiced in that era. 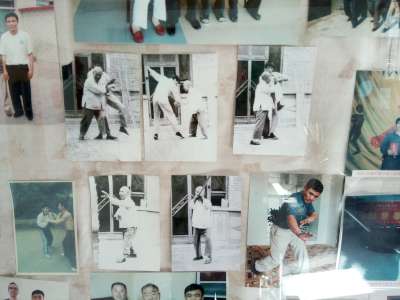 Through his teacher Liu Yunji and his own father, Yu Chunhai was able to contribute many stories about the early days of how xingyiquan went from being an outsider’s art to the predominant art practiced in Liu Kuai Zhuang, as well as anecdotes about the characters who stayed there, including Li Cunyi, Xue Dian and Shang Yunxiang. One of Yu’s favourite stories is of how Shang Yunxiang came to study with Li Cunyi. According to Yu, Shang Yunxiang martial arts potential was first noticed by Guo Yunshen. Knowing that Li Cunyi was looking for talented students to pass on his system to, Guo brought Shang to see Li, who was at that time living in Tianjin. However, Li was distinctly unimpressed (Shang was short, only 1.6m tall, and quite skinny too) with Shang and at that time refused to accept him as a student. Guo, irritated that Li couldn’t see Shang’s potential, taught him xingyi’s Santi and Beng Quan (crushing fist). Some time later (some accounts say 1 year, some say three), Guo again brought Shang to Li. This time, impressed by the power of Shang’s Beng Quan, Li agreed to accept him as his disciple.
Given the controversy within Chinese xingyi circles in recent years over who, if anyone, learned Xue Dian’s full system, I asked Yu about this issue. Yu thought that the people with the best claim to this would either be Xue’s son Xue Zhiyi, or the Xin family (Xin Shiyin, Xin Shirong), who learnt both Xue’s xingyiquan and the Xiang Xing Quan which Xue formulated based on his experiences and knowledge.

Of course, quite apart from his deep knowledge of the MA history of the area Yu laoshi is well known for his ability to use his xingyi – he has fought in Leitai competitions 4 times in his life, the fourth time when he was 47 years old, soundly beating opponents who were often 20 years his junior. His special technique is a move called “raising the horse whip” (Ju Ma Bian 拘马鞭), a technique in which the wrist/forearm ‘crashes’ down on the opponent’s guard, which he has trained to be extremely heavy and penetrating. Having been on the receiving end of his Ju Ma Bian, I can attest that the pain and numbness from just one or two strikes was enough to discourage any further attacks on my part. He also demonstrated freely his ability to take strikes to the upper body and head, at one point picking up a small wooden bench and smacking his head with it, making a large ‘thwock’ sound which made all of us onlookers wince – not bad for a 60 year old! 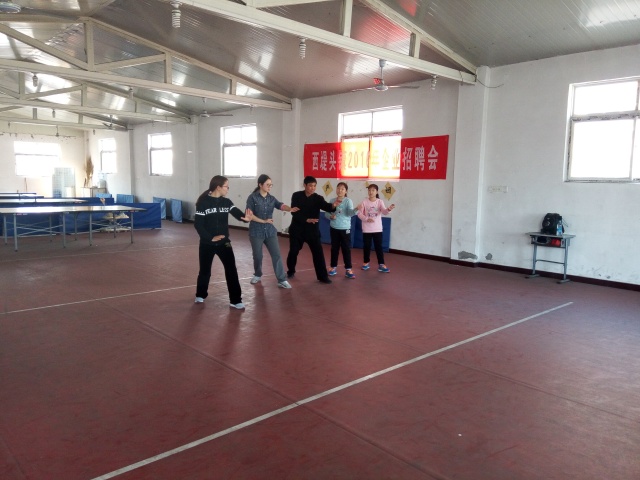 At the end of my visit, Yu laoshi said that it is his greatest wish that more young people both in China and abroad would start studying xingyiquan. Yu laoshi is doing his bit by teaching local teenagers for free. If any readers are interested in how to really use xingyiquan, they could do worse than to pay a visit to Yu Chunhai laoshi.