I’ve just returned from a training trip to Taigu in Shanxi province, one of the cradles of xingyiquan in China and the stronghold of Song and Che styles. During my week-long trip, I managed to visit Zhao Chuanhui (the son of famous Song style master Zhao Yongchang) and train with my shiye (grandteacher) Song Guanghua and his son, Song Baogui. I just wanted to share some of my impressions during the trip on this blog. ZHAO CHUANHUI M Zhao lives and teaches in the tiny town of Dongguan, which is located almost exactly between Taigu town (home of Song and Che style xingyi) and Qi county (where Dai style xinyi developed). When M Zhao heard I was interested in meeting him, he very kindly offered to pick me up from Taigu train station. After a 20 minute ride in his Suzuki minivan we arrived at his house, a traditional brick courtyard that you see all over much of northern China. He explained that he runs a small provisions shop in town, and that he only has time to train students in xingyiquan in the evenings and weekends. After a quick tour of the downstairs, M Zhao asked if I wanted to see his wuguan (dojo). It was only then that I realised that he had converted the second storey of his house into a concrete-floored wuguan large enough for a dozen or so people to train in at the same time, complete with an assortment of spears, swords and whipstaffs (biangan – short, whippy staff very popular in Shanxi and Northeast China). 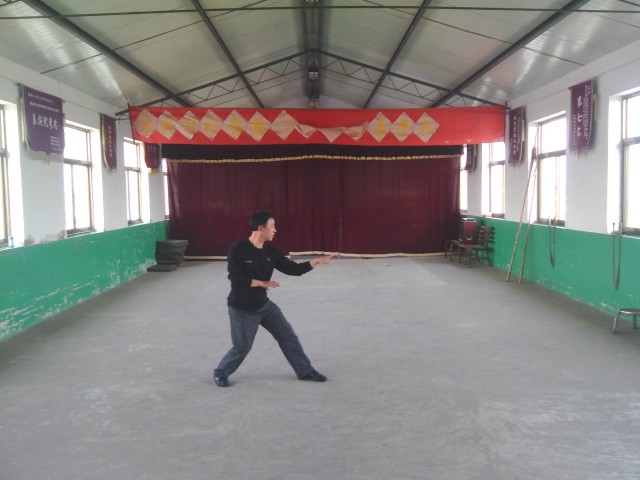 Once up there, M Zhao told me about his training under his father Zhao Yongchang. Zhao senior was one of the senior disciples of the famous Song style master Song Tielin, and was a professional coach for the Shanxi wushu team as well as various cities in Shanxi from the 1960s until his passing in 1993. M Zhao started training under his father from a very young age, and given that he is currently in his 50s has been practicing xingyiquan for over 4 decades. We then spent the next 4 hours discussing various points of Song style xingyi. I was particularly impressed by his explosive fajin – he is not tall (~1.6m) and probably only weighs about 120 pounds, but the power he can generate is out of all proportion to his size, easily lifting me (~150 pounds) clear off my feet when demonstrating hu xing (tiger) for example. Like all teachers of Song style I have met, he stressed that the power in xingyi comes from the kua and dantian, not the arms. He also emphasised several times the requirements of suo (contraction) and zhan (expansion) of the dantian when striking, and lifted up his shirt to explicitly show this. With such a clear-cut demonstration, it is easy to see the links between Song style and its ancestor art, Dai style xinyi. As it started to get dark, several of M Zhao’s students started to trickle into the wuguan, most of them ranging in age from early 20s to late middle age. M Zhao said that he previously taught a lot of young kids (6 – 16) and in fact many of his younger students have gone on to specialise in wushu at the sports institutes in big cities like Beijing, Shanghai, Harbin etc. However, in recent years he has not had as much time to coach younger students. When asked about fighting training, he said that he knew that side of the art but very few of his students were interested in training it. After several impromptu demonstrations by his students, including an interesting free-style mix of different versions 5 elements, we retired to a local restaurant for a delicious meal of home-style Shanxi cooking and the usual toasts of baijiu (Chinese moonshine) which almost invariably accompany such meals in China. I bid farewell to M Zhao regretting that I did not have more time to spend to train with him, and would encourage anyone with an interest in Song style xingyi to visit him: he is a very open teacher with great skills and a deep understanding of his art.

Xingyiquan enthusiast
View all posts by yosaku →
This entry was posted in Song style xingyiquan. Bookmark the permalink.