Shang Ji with student and wife

Shang Ji is a master known for his efforts in spreading xingyiquan in Xi’an as it was passed on to him by his master Ma Litang, who was a grandstudent of Guo Yunshen through Liu Weixiang. The following extract is taken from this page.

“Starting Out in Wushu

M. Shang was born in Xingtang county, Zhengding prefecture in Hebei province in northern China. His father was an intellectual who had studied in Japan, but his grandfather was a wuju (successful military candidate in the provincial exams) in the Qing dynasty. As a child, he would often watch his grandfather practicing martial arts. At first, he was just curious, but as time passed, wushu found a place in his heart, especially those peculiar stances and outlandish weapons, had an almost magical fascination over young Shang. After his grandfather had finished practicing, young M. Shang couldn’t help but mess around with the weapons, acting out his own self-invented routines. M. Shang’s grandfather, seeing that young Shang was keen on martial arts, taught him some assorted basics like horse stance, front kicks, punches, bridge stance, etc..

When M. Shang was 10, in order to further his studies his parents sent him to the No.8 Normal School in neighbouring Zhengding county, 15 miles away, which had a tradition of emphasising sports and physical education. The guoshu coach there was the famous xingyi master Geng Chengxin. During his 6 years at No. 8, M. Shang learnt basic xingyi routines like the 5 fists, 12 animals, Ba Shi (8 postures), etc, deriving great benefit from their practice.

In CMA circles, there’s a saying “yi chu baishi, bai chu xue yi” (disciple of one, student of 100). M. Shang is an exception to this rule, his custom was to learn through challenges, he would learn from whoever could best him in a challenge.  Quite apart from verbal baishi, M. Shang was a formal disciple of 3 famous masters.

When he was 15, M. Shang moved to Beijing with his father to further his studies. Whilst there, he became a disciple of master Xuan Sheng (a Buddhist monk), who was one of the main disciples of the Shaolin abbot Qiu Zhonghan. Xuan Sheng’s ying gong was refined, but it was his qing gong that was unparalleled. Even the famous qing gong master, Li ‘the swallow’found that he could not shake Xuan Sheng off.

After M. Shang became Xuan Sheng’s disciple, he would spend half the day at school and half the day practicing martial arts. This routine continued for seven years without interruption. Shang was extremely dedicated, faithfully practicing every routine and exercise Xuan Sheng taught him. Of the routines he learnt, M. Shang was particularly accomplished at Kunwu sword, Jin Gang Quan (Buddha’s Attendant boxing) and Luohan Zhang (Arhat palm), and had also developed some skill in Shaolin Sanda. Xuan Sheng would often receive visits from other martial artists. After about 5 years’ practice, Xuan Sheng began to allow Shang to engage in friendly contests with some of these visitors. Shang gave a good account of himself in these contests. Xuan Sheng liked his guts and ‘never say-die’ attitude, and so taught him some more combat skills, which helped him develop softness and strategy in his sparring. Slowly, word of Shang Ji’s fighting abilities started to spread in Beijing.

It was New Year’s Day in 1942. Beijing’s Tao Ran Ting Park (originally called Nan Xia Wazi) was a  desolate, forsaken place. Because Tao Ran Ting at that time was overgrown and out of the way, robberies, muggings and sexual assaults were quite common there, hence people rarely went through it if they could help it. M. Shang,emboldened by the 7 years’ Shaolin kungfu under his belt, decided to go for a stroll through this ‘no-go zone’. Strangely enough, he was not accosted by thieves, but came across a martial arts master instead!

As he leisurely strolled up to the doors of a temple there, a hunchbacked, silver-haired old man emerged. Upon seeing M. Shang, the oldster said: “When I saw you 6 years ago, you would always clench your fists when talking. Now you don’t, which means you must have made some progress in your gongfu.” M. Shang, discomfited by his words and his tone, wanted to challenge the monk to a match. The monk, discerning what was going through M. Shang’s head, chuckled and said “Come on then! Let’s see what Xuan Sheng has taught you.” M. Shang did not even bother to respond, but went on the attack straight away. To his surprise, he found that no matter what techniques he tried he couldn’t land a blow on the oldster. After a while, the oldster spoke, saying “Now it’s my turn!”. So saying, he knocked M. Shang 7 or 8 steps back with a mere poke. Just as M. Shang was about to fall over the oldster darted over and steadied him. As a result of this encounter, M. Shang was totally convinced of the stranger’s gongfu.

It turned out that the stranger was Zhang Jiantang, one of Zhang Zhankui’s main disciples who had also studied Tongbei under Chen Qing (nicknamed ‘Fei Dao’ [flying sabre]). At that time, he was employed as a wushu coach at Beijing Normal University. He had spent his entire life investigating the principles of Sanda. He would often test out techniques he had developed on his opponents. If they worked, he would keep them; if not, they were abandoned. His ‘guinea pig’ in these trials was the famed wrestler Bao San. The fruits of his investigations, the two books “Tongbei Sanshou in 24 postures” and “Sanda Shi San Jian” (13 sword Sanda) represent the essence of combat.

M. Shang followed Zhang for 4 years, learning Tongbei Sanshou and Zhang’s 152-posture taiji. During that 4 year period, he practiced nothing else. Zhang used to live at Zhang Yi Men, M. Shang had to walk from one side of Beijing to the other to get to his Shifu’s house. Upon arrival, after a short break to get his breath back, they would start sparring, and continue that way until M. Shang was exhausted. In sparring, neither side was allowed to hold back, you had to hit whatever you encountered, whether it be a wall or a tree. If you got injured, Zhang would help heal it. Once healed, they would start sparring all over again. Zhang was willing to be the ‘punchbag’.

Those 4 years of arduous San Da training meant that M. Shang’s combat ability advanced in leaps and bounds. Ordinary people, on crossing hands with him, had a hard time fending off his attacks. As M. Shang, not content, continued to ‘cross hands’ with adepts from other arts and kept on improving his art.

By this time Shang was an indoor disciple of two accomplished masters, and rarely lost in challenge matches. To his surprise, he suffered defeat at the hands of the xingyiquan master Ma Litang, nicknamed ‘the Tank’. 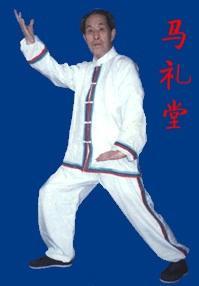 M. Shang first met Ma Litang (grandstudent of Guo Yunshen through Liu Weixiang) at the house of Li Jianqiu (another martial artist) in the summer of 1953 on a return visit to Beijing to visit relatives. As soon as he heard that Ma Litang’s gongfu was out of the ordinary, M. Shang asked to cross hands with him. M. Ma took up a ready stance and allowed Shang to strike him three times, to no visible effect. Ma, in contrast, knocked Shang onto his behind with a simple forward sinking with his hands and a light exhalation.

Seeing the schock on Shang’s face, Ma said with a smile “Your techniques are fine, it’s just a pity you haven’t got any nei qi [inner ch’i]”. M. Shang thought to himself “So he knocked me over with his ‘nei qi’! I wish I knew how to use my nei qi!’ And so, M. Shang became Ma Litang’s disciple. He threw himself into the study of qi and jin, and how these elements are used in actual combat. M. Shang would spend whole days at his Shifu’s house practicing, asking questions and being ‘fed’ different jins. After several years, he had completely ‘softened out’ his xingyi and learnt Ma’s qigong in depth too.

Apart from his 3 main teachers, one other person left a deep impression on M. Shang’s martial arts journey, namely Prof. Li Jianqiu, who taught at Qinghua university (one of the top universities in China). Throughout his 5 years at Qinghua (beginning in 1946), M. Shang studied xingyi and bagua with M. Li, deriving great benefit.

Upon graduation in late 1950, M. Shang was allotted a teaching post at the Naval & Aeronautic College. Although his job had nothing to do with martial arts, M. Shang always viewed them as his ‘second job’, as an indispensable part of his life. And so it came about that he started to teach martial arts to the students at his college. During his 16 years in the armed forces, every day in the free hours of the early morning and late evening passers-by would see a large group of martial arts enthusiasts practicing behind M. Shang. Similarly, his flat was often crowded with students wanting to learn martial arts. As each class of students graduated, they took M. Shang’s art with them to the 4 corners of the country. Unfortunately, in 1957, due to the ‘Anti-Rightist Movement’ that swept over the country, the army forbade the practice of martial arts. M. Shang was labelled a ‘retrograde’ and a ‘conservative’. It was all just water off a duck’s back to M. Shang, he would often say ‘You can say what you like, I’ll just keep on practicing’. As a result of the political campaigns M. Shang was forced to practice at night in secret.

Unfortunately, M. Shang only enjoyed a few years of peace and quiet before the Cultural Revolution broke out in 1966. In the madness that ensued, M. Shang was labelled a ‘Chou Lao Jiu‘ (lit. ‘stinking nine olds’, a catch-all term for intellectuals), dismissed from his post at the College and sent west, to Xi’an. But nothing could stop M. Shang from practicing: even whilst he was confined in a ‘Niu Peng’ (lit. cowshed, makeshift prisons), after the public criticism sessions were over, he would still find ways to practice while sitting on his bunk. It was during this period that M. Shang condensed what he had learnt from his teachers and the older generation of masters into the book “Attacking Art of Xingyiquan” (Xingyiquan Jiji Shu).

Out of curiosity, I once asked him, “M. Shang, you suffered a lot because of your practice of martial arts, why did you keep on practicing?” M. Shang laughed and said “I was a weak kid – it was martial arts that made me strong. As a young man, I travelled all over China – it was martial arts that kept me safe. In the Cultural Revolution, in the ‘Niu Peng’, I was tortured, both physically and mentally – it was martial arts that got me through that. I’ve never had a major illness’ – to emphasise his point, M. Shang thumped his chest and went through a few moves – “Look at me, I’ll be 64 this year (1986), I’m still active and still dare to spar with you youngsters. Where do I get the energy? Martial arts! Why would I give up something that’s done me so much good?!”

7 Responses to Xingyiquan of Shang Ji