Apologies for the long hiatus. Due to a new job, I no longer have enough time to do long translations. Instead I will try to post snippets and interesting videos on a more regular basis.  The first of this new series of ‘snippets’ is about one of Yang Chengfu’s senior disciples in Beijing, Cui Yishi (also known by his original name of Cui Lizhi). 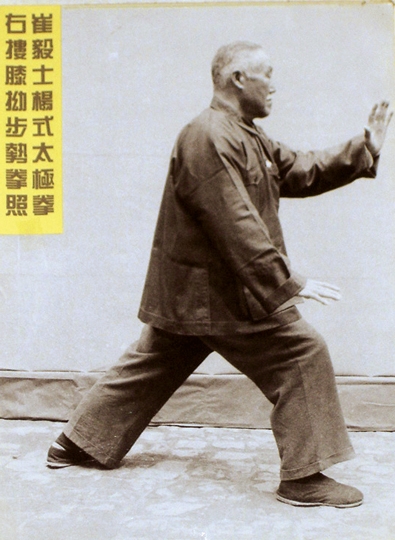 I recently read an interview with Cui’s grandson, Zhang Yongtao (the original chinese is here: http://read.sportpaper.cn/zhwsmag/html/2011-06/02/content_213003.htm). Two passages of the interview struck me as particularly of interest, and I have translated them below.

“In summer, my grandfather would normally sit in our courtyard practicing his taiji while wearing a dalian (Chinese sleeveless wrestler’s jacket). When the mood took him, he would let me feel his belly. To me, it felt as if there was a rubber ball in his belly which could move around to follow your hand. If you pushed on it, it felt as though your hand was ‘sucked’ in and you couldn’t pull it back. Then, the ‘ball’ would suddenly ‘spit’ your hand out, bouncing you back several steps.

Another time, we saw my grandfather sitting shirtless on a stool. He had stuck a flattened lump of dough onto his belly; as he went through his ‘seated taiji’, not only did the dough not fall off, it moved around with the movements of his belly. This kind of gongfu was amazing! Even now, I don’t really understand how he did it. ‘This gongfu of mine you won’t be able to practice, it’s a taiji training method called dan tian gong, most normal people can’t practice it. I’ve been training it since I was a kid. In pushing hands, I’m not afraid of people pushing directly on my stomach; if they do, they won’t be able to get away.”

It is obvious that the taijiquan that Cui practiced contained training methods that produced intense dan tian development. Do these training methods still exist in Yang style or have they been lost over time?

The second section of the interview that caught my eye is to do with the family’s experiences during the Cultural Revolution:

“During the Cultural Revolution, my grandfather was labeled and persecuted as a ‘Capitalist’, an ‘Anti-Revolutionary Academic Authority’, as was my mother (Cui Xiuchen).

Even though they both had gongfu, in that kind of environment, no-one dared to fight back. One day, I came home from the factory to see my mother and grandfather tied up and kneeling in the centre of our courtyard, a group of Red Guards searching our house. In that kind of atmosphere, no-one dared say a word. I quietly slipped to stand beside my mother and grandfather, thinking to protect them somehow. My grandfather whispered to me: “With my gongfu, they can’t tie me up. All I have to do is use a bit of jin, and these ropes will loosen.” So saying, he shook his body slightly, and the ropes did indeed loosen. My mother was so scared by this, she said “Don’t move! If you move an inch, we’re all dead.” Luckily the Red Guards didn’t notice.

Later, when the Red Guards publicly denounced my mother and grandfather, they made the two of them kneel down, then placed bricks under their legs. With the bricks in place, the guards then placed a staff over each person’s calves, and then had two people stand on the two ends of the staff so that their whole weight pressed the person’s shins into the bricks. My grandfather had good leg gongfu, so his shin muscles could take some of the weight (i.e. so that the bricks were not pressing on bone). My mother was not so fortunate, and passed out several times from the pain.

During the years of the Cultural Revolution, my grandfather not only suffered physical persecution,  his house was  also ransacked, and he was publicly denounced. As if this wasn’t enough, he was not allowed to teach taiji. To someone like my grandfather, for whom taiji was his life, this was perhaps the heaviest blow of all. He became depressed, and his health started to fail. Later, on a trip to the hospital, he was diagnosed with oesophageal cancer, which in those days was an untreatable disease.”

The article also mentions that another taiji teacher that was publicly denounced in the same sessions was Wang Peisheng’s teacher, Yang Yuting.  These kinds of stories are common amongst teachers who lived through that era – but that is probably a subject best left for another post.

8 Responses to Stories of Cui Yishi