Thanks to the gracious and indefatigable Rose Oliver of the Double Dragon Alliance, I managed to meet and talk to M Wang Senlin, who is a disciple of Deng Fuxin, a xingyi master who will be well-known to those readers who also frequent the Emptyflower/Rum Soaked Fist discussion boards.

For those not familiar with M Deng, he learnt his xingyi from 4 highly respected masters, namely:

(2) Jia Chunyuan, a master of xingyi from Tianjin who had learnt his xingyi from Li Zhenbang, Li Luoneng’s grandson

(3) Jiang Rongqiao, famous master of bagua and xingyi who was a disciple of Zhang Zhaodong (aka Zhang Zhankui)

(4) Liu Molin, a grandstudent of Li Cunyi through his master Jiang Yuhe

As 3 out of M Deng’s 4 masters can trace their xingyi back to Liu Qilan, it has been said that his branch is a ‘melting pot’ of Hebei xingyiquan. M Wang himself is profiled on Rose’s site, here. 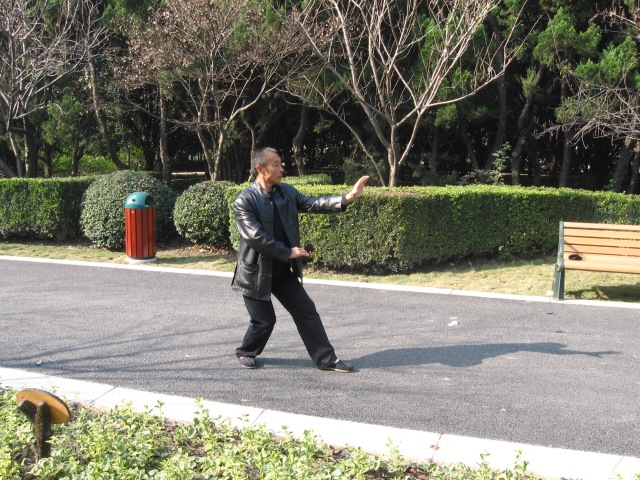 M Wang was very generous in demonstrating xingyi responses to possible attacks. I was impressed by his speed and explosive power, especially given that he is  in his mid-fifties! In conversation, he stressed that at advanced levels, xingyi prefers to target vital points (da xue wei), which echoes the article on Li Guoliang elsewhere on this blog.  Of the xingyi masters I met on this trip, M Wang seemed to place the most emphasis on xingyi as a practical fighting art. As we said our goodbyes, M Wang lamented that very few young Chinese people are interested in traditional chinese martial arts, often preferring to take up Tae Kwon Do instead.