The following translation is an excerpt taken from this article .

“Pei Xirong was born in 1913 in Raoyang county in Hebei province. His father was a core member of the Yi He Tuan [1], and his mother had also participated in the ‘Red Lantern’ movement [2]. His uncle, Qi Dalong, was a bodyguard in the caravan agency established by Li Cunyi who guarded caravans travelling between Tianjin and Gubeikou. When the Allied Forces invaded Tianjin, he and Li Cunyi battled against the invaders at Laolongtou Train Station. He fought courageously, sustaining several wounds.

The feats of his forefathers inspired Pei Xirong, so that from a young age he held aspirations of practicing martial arts to serve his country. Pei Xirong’s family had practiced Traditional Chinese Medicine for 4 generations; it was for this reason that Pei’s grandfather, an able doctor, was called ‘Pei San Tie’ (3 poultice Pei). Pei carried on the family tradition, learning TCM at the same time as martial arts, laying down a solid foundation in the process. In 1929, 16-year old Pei went to the ‘National Leitai Tournament’ held in Hangzhou. Whilst there, he met the famous master of xingyi and bagua, Fu Jianqiu, and had the good fortune to become his student.

Fu Jianqiu was a skilled disciple of Li Cunyi. In the winter of 1929, Fu Jianqiu, accompanied by Pei, went to Wudang Shan in Hubei province at the behest of Li Jinglin. At the Purple Cloud Palace (Zi Xiao Gong) on Wudang, he met the Taoist abbot Xu Benshan. Pei Xirong recounted that Fu Jianqiu had compared skills with Xu Benshan 3 times, with each expressing admiration for the other’s skills In the end, Fu considered that Xu was an accomplished martial artist  who had left behind the ‘world of dust’ [the secular world] and so became his student. He was accepted as a 16th-generation disciple of Wudang martial arts, and was given the Taoist name ‘Fu Taishan’ (the ‘He’ character generation) whilst Pei was inscribed as a 17th-generation inheritor of the ‘Jiao’ character generation. [3] 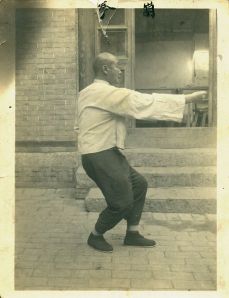 The years of arduous training spent following Fu were the start of Pei Xirong’s martial arts career. Later on, Li Jinglin recommended that Pei continue his studies at the Nanjing Central Martial Arts Academy. After that, Pei did stints as a TCM doctor in Beijing and Zhengzhou. Whilst in Zhengzhou, he also worked as an editor for the Sports section of the ‘North China Daily’ (Huabei Ri Bao). Throughout all this, he continued to practice his martial arts, and also learnt Xinyi Liuhe quan from the famous master Bao Ding (aka Bao Xianting).

Pei Xirong’s skills improved in leaps and bounds under the tutelage of his various teachers. Bao Xianting thought particularly highly of Pei, entrusting him with teaching duties as well as compiling martial arts manuals.

In the mid-1930s, the North China Daily was forced to cease publication because it had published several progressive poems. As a result, Pei left Zhengzhou and returned to the Central Martial Arts Academy in Nanjing. One day, as he was walking along the bank of the Qinhuai river, he saw some hoodlums harassing a young lady.  Furious, Pei used the ‘Single Seizing’ (Dan Ba) of Xin Yi Quan to throw one of the hoodlums into the river. The others, upon seeing this, quickly fled.

By sheer coincidence, the then head of the Central Martial Arts Academy, Prof. Huang Bonian, happened to witness this scene. Seeing that Pei was both of upright character and was unusually skilled, Huang accepted Pei as his disciple on the spot, going on to teach Pei his ‘Dragon Shape Baguazhang’. Later Pei Xirong also learnt Bagua Taiji and Bagua Yinyang Panshou from Wu Junshan. By this point Pei Xirong’s first teacher, Fu Jianqiu was teaching in Wuxi in Jiangsu province. In the subsequent years, Pei continually shuttled between Nanjing and Wuxi. In this time, he became more powerful and learnt the essence of the internal arts of Xingyiquan, Baguazhang, Taijiquan and Wudangquan.

After the outbreak of the Sino-Japanese war, the Central Martial Arts Academy moved to the Soutwestern city of Chongqing (formerly Chungking), and later worked as a doctor in Xi’an. Pei Xirong spent several years living near the Little Goose Pagoda. On numerous occasions, he attended to soldiers fighting the Japanese as well as local people for free, earning him a good reputation in the area.  After the Japanese surrender, Pei returned to the East of china via Xuzhou. His train was halted at Bengbu (in Anhui province) by an accident, and hence Pei decided to lodge at the Bengbu Transport Hotel. One morning, he was spotted by a local Praying Mantis master named Li as he was practicing his martial arts in a park. Li paid Pei a visit at his hotel and invited him to a banquet being held at another hotel. After the banquet was over, Li asked if he and Pei could compare skills. Pei Xirong suggested that each of them perform one routine, to see each other’s techniques. Li replied ‘If you’re worried about our techniques, I’ll spar with my disciple’ .  So saying, Li started to spar with his disciple. His palm techniques were impressive, and was accustomed to using slaps to the face to win.

Pei hitched up his robe and started sparring with Li. Li kept on trying to attack Pei’s face, only for Pei to evade each time. Li was skilled, and was suddenly attacked Pei’s waist with the technique ‘Gui Chuai Jiao’ (‘devil kick’). Li’s intent in doing so was that if the technique landed, Pei would be injured for sure; if he used his arms to try and ‘catch’ the leg, Li would attack Pei’s face. In order to defend against Li’s attack to the face, Pei used his leg to intercept the kick. Li then grabbed Pei’s intercepting leg. Pei then employed the ‘shaking jin’ (tandou jin) in the ‘Chong Xi’ (‘knee butt’) technique from Xingyi’s ‘8 character set’ (Ba Zi Gong) to strike Li’s ribs, knocking Li to the floor.

Li then got up and tried to use ‘Wicked tiger pounces on sheep’ (E Hu Pu Yang) to headbutt Pei in the chest. Pei, seeing that Li was going all out, used a dislocation technique to dislocate Li’s lower jaw. Afterwards, Pei relocated Li’s jaw and gave him some medicine. The two became friends after that, with Li asking Pei to stay in Bengbu to exchange techniques.

Pei’s victory over Li raised Pei’s profile in Anhui province a lot. Soon, two well-known boxers from Zhengyangguan came to Bengbu to invite Pei to come to Zhengyangguan to see the sights and meet the boxers there. One of the Gaos was so strong he could play with a 100 kg stone lock [4] as if flicking a marble. Pei, upon realising his strength, used his ‘dragon shape baguazhang’ to weave and evade, so that Gao could not get in close. So although Gao was strong, he could find no opportunity to grab Pei. Because Gao had practiced so much ‘hard gongfu’ (ying gong), as the bout became more prolonged, he started to tire and wheeze. Gao, wanting to get Pei to stand still, picked up a handful of sand from the ground and flung it at Pei’s eyes.  To his surprise, Pei was ready for this and pulled out his iron fan, blocking the sand. Gao then grabbed Pei’s arm and attempted to use the ‘Back Pack’ technique from Shuai Jiao, to which Pei Xirong once again used a dislocation technique to dislocate Gao’s forearm, winning the bout.

Immediately after his victory at Zheng Yang Guan, Pei took a train from Bengbu to Wuxi, where one of his friends introduced him to work in the Athletics Department of Jiangnan University. In 1951, Jiangnan University obeyed orders to merge with Nanjing University, and so Pei came to Shanghai to teach at Fudan university (one of the best universities in China). During his time in Shanghai, he continued to train hard, gaining pointers from Yin Yuzhang (Yin Fu’s son), Dong Wenxiu [5], Huang Boshou and Hu Yaozhen [6]. With the advent of the Cultural Revolution, Pei’s teaching duties were put on hold.”

After Pei retired, he accepted appointments to various Qigong and martial art associations and went on lecture tours in Japan, Malaysia and Singapore.  His students include Gao Tieniao (now teaching in Sweden), as well as Liu Xiaoling and Jane Yao (both now teaching in the USA).

[1] The Yihetuan, lit. ‘Righteous Harmony Society’, more commonly known as the Boxers, was a sect that believed that they could perform extraordinary feats through training, martial arts and prayer. They launched the Boxer Rebellion (1898-1901).

[2] The ‘Red Lantern’ group was a branch of the Yihetuan that accepted only women, local to Tianjin.

[3] In a traditional Chinese martial arts ‘family’, disiples are often given generation names based on a poem passed down by the founder of the style. Thus, for example, the fourth generation baguazhang master Sun Zhijun is from the ‘shan ‘[mountain] character generation, based on a poem left by Dong Haichuan.

[5] Dong Wenxiu was a master of bagua and xingyi who was thought to be a grand-newphew of Dong Haichuan. Most of his teaching came from Liang Zhenpu, but he also received instruction from Liu Fengchun, Li Cunyi and Zhang Zhaodong.

[6] Hu Yaozhen (1897-1973) was a master of Xinyiquan who was also well versed in acupuncture, chinese medicine and various kinds of qigong. He first learned Xinyiquan from Peng Tingjuan, and Mu Xiuyi and later learnt taijiquan from Zhang Qinglin (Yang Chengfu’s nephew) . He is most famous for having taught Feng Zhiqiang.