I have been looking for an article on Chen style taijiquan to include on my blog for a while now. The extract translated below is an excerpt from an article (see original here ) that appeared in the Guangzhou Daily a couple of years back. The article is based on an interview with one of Chen Zhenglei’s disciples, Zhang Xiaowu, who runs a taiji school in Guangzhou (previously known as Canton).  The inclusion of this article goes against the ‘theme’ of this blog, which is to introduce branches of the internal martial arts that are less well-known in the West, but I thought Zhang had some interesting things to say.

“Taijiquan trains for speed and power

If taijiquan is to be used for combat, the student doesn’t need to learn the forms, the basis and focus of the training should be laid on power training. This is trained via single-posture fajin and pole-shaking. This kind of training produces relaxed, explosive power, allowing students to release ‘whole body power’ in fighting, leading to the stage of “every part of the body is a fist, attacking with any part of the body”. To be precise, the taiji that people see in parks is merely the forms of various styles of taiji. Like a lot of other martial arts, during its evolution taiji has become more and more ‘form-centred’, which is one of the main distinctions between wushu and foreign martial arts. Due to the gradual development of forms, wushu has become a kind of culture, this is an inevitable step in its history.

Taijiquan has already become one of the most favoured keep-fit methods amongst the elderly and middle-aged because its slow movements have great health benefits. As a performance art, because taijiquan’s principles embody traditional chinese culture and thinking and its form is aesthetically pleasing, it is the martial art most capable of reflecting chinese culture. Both this ‘old-man’s taiji’ and ‘performance taiji’ are only one part of taiji, namely its form. In original taiji quan which emphasised fighting ability, forms were least important. And yet, for various reasons, during taiji’s evolution forms have gradually become the ‘core’ of taiji, to the point where very few people know what real taiji is about. The professional performers and the hobbyists all say they ‘know’ taiji, actually all they know is the taiji form. The main difference between them are in the quality of performance and the difficulty of the movements. Taijiquan has become a form of calisthenics; most of the taiji that we see should be called ‘Taiji Cao’ [taiji exercises] rather than Taiji Quan [Taiji fist].

Does ‘real’ or ‘complete’ taijiquan still exist then? Can we still see it today? The answer is yes, but it is only to be found amongst those who have learnt the complete system and were willing to put in the time and effort to train. These peope are not necessarily taiji ‘grandmasters’, nor do the famous ‘grandmasters’ of taiji necessarily have the skills. One sure way of testing someone’s gongfu is to get him to do some pole-shaking. The length and weight of the pole someone uses, as well as the number of times someone can shake it, are one way of measuring someone’s gongfu.

Nowadays how many taiji enthusiasts practice pole-shaking? The Xiaowu Taijiquan Fitness Centre, situated in Guangzhou’s Tianhe Sports Centre, certainly does. The boss and head coach, Zhang Xiaowu, comes from Jiaozuo in Henan province and is a disciple of Chen Zhenglei, the Chen style taiji grandmaster. 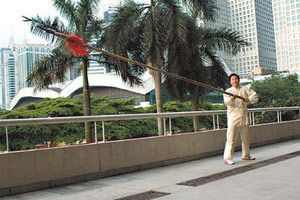 He has been teaching taijiquan in Guangzhou for 16 years. 38 year old Mr Zhang can certainly be considered to have gongfu – he can shake a 4.2m long spear (which normally has the tip removed in practice to make it a pole) weighing 10 kg more than 70 times continuously. This may not sound like much, but the effect of leverage means that the power required to thrust such a pole forward and retract it again is considerable – probably only a few people could shake it even 30 times. Martial artists always like to compare strength; if someone asks to cross hands with Zhang Xiaowu, Zhang always demonstrates pole-shaking with his 4.2m-long pole, and then invites his opponent to shake a much lighter 3m-long pole. Through shaking the lighter pole the opponent can gauge how heavy the long pole must be. When Zhang asks the opponent if they’d like to try the longer one, they normally get scared and leave. 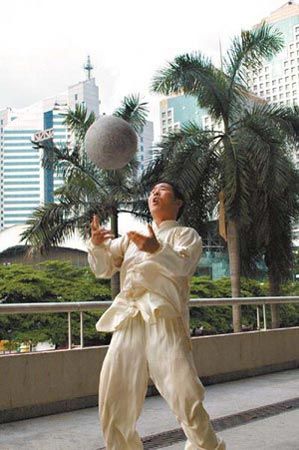 Zhang Xiaowu, with his skills, doesn’t like challenges, but often takes it upon himself to do good deeds. Zhang has caught several robbers, petty thieves and hooligans in the area around the Tianhe Sports Stadium, which has an unsavoury reputation. Sometimes even when he encounters a criminal with a weapon, Zhang Xiaowu will still charge in and seize the wrongdoer. On the evening of the 2nd of August, 2002, 4 assailants knocked down a man and a woman in front of Tianhe Sports  Centre in order to steal their money. When Zhang Xiaowu heard the commotion he rushed out with a roar and knocked out one of the robbers, and catching two others. Because Zhang frequently catches these people, all the people at the various police stations in the area know M Zhang.

Zhang Xiaowu told this reporter, if you really want to practice taiji, you not only have to practice forms, you also have to train nei gong and explosive power. If you want to gain explosive power, you should first hold stances [zhan zhuang]. Zhan Zhuang regulates the nervous and endocrine systems so that the student does not panic in combat; at the same time, the student should train shaking power [tan dou jin]. The main methods for training this are pole-shaking and single posture fajin. Pole-shaking is a distinctive exercise within taiji used to build the practitioner’s power. When starting to train pole-shaking, novices should use a small pole 3m long and weighing roughly 2-2.5 kgs. Once the novice is able to shake the pole 300 times on both sides, he can progress to the long pole (weighing from 3-5 kgs). Once the student can shake the long pole 300 times on both sides, he may then move on to fast shaking, with the aim being to shake the pole at a rate of 120 times per minute. Once this standard is reached, the student moves on to train issuing power from fists, elbows, legs and shoulders. Amongst these,the main focus is on issuing with the fists – the student must reach the point where they can punch 7-9 times a second, with an impact force of 100-120 kg; if they are practicing ‘1-inch punches’, then the impact force should be around 60-80 kg. If a student trains diligently in the way outlined above for 3-5 years, and assuming that they regulate their rest and diet, they will come to experience first-hand the power of taiji and should basically be able to defend themselves.

When our reporter asked about whether the student should also practice pushing hands, Zhang Xiaowu replied, “Pushing hands is just a training drill, the aim is for it to act as an intermediary for progressing on to sanshou [free sparring]. The practice of pushing hands doesn’t actually help one’s sanshou that much. A lot of people who are good at pushing hands think that they have developed gongfu, when in truth they have only mastered a skill under cooperative conditions, which isn’t real gongfu. Taiji’s true essence is in its sanshou, which has no set moves. Actually, sanshou trains speed, reactions and explosive power. Once the student possesses these attributes they have the foundation for combat, specific ‘moves’ are actually secondary. If someone wishes to become an expert fighter, they should devote more of their time to non-cooperative sparring.

Some people studied taijiquan with Zhang Xiaowu purely to learn ‘real gongfu’, they only learnt fa jin, no forms, but barely any of them managed to see it through to the end. Training for real gongfu is tough, hard work, whereas learning forms is relatively comfortable. However, if you don’t learn forms, outsiders think you don’t know taiji. The gradual trend towards emphasising forms is an inevitable consequence of our modern society, where combat ability has very few uses. Zhang Xiaowu realises that taijiquan’s market in a fast-paced modern society which leaves people stressed out and fatigued by their jobs is in its ability to make people healthier. This is why Zhang stresses taijiquan’s health-giving properties and not its fighting ability when he teaches.

Even so, this reporter hopes that more people will come to know the real or ‘complete’ taijiquan.”