Zhaobao taijiquan is an interesting major style of taijiquan which has produced many top level masters and seems to have preserved an extremely complete system including neigong, forms practice in different frames as well as a multitude of weapons. Unfortunately, because very few masters of this style have moved to the West, it remains little known. The branch introduced in this article is that of Hou Chunxiu, one of the first masters to popularise Zhaobao taiji in its ‘second home’, the city of Xi’an. The article is an extract from a book by Lin Quanbao, a disciple of Hou and a grand-disciple of another prominent master of Zhaobao taiji, Zheng Wuqing (whose taiji will be introduced in another article). You can read the full article here

” In 1975 we found out that Hou Chunxiu had retired and was teaching taiji in Xi’an. M. Hou’s Zhaobao taiji came from Zhang Jingzhi, who was a descendant of Zhang Yan, a sixth-generation master of Zhaobao taiji. The lineage is as follows: Zhang Yan – Zhang Han – Zhang Jinhai – Zhang Jingzhi (sic – other accounts give different lineages). M. Hou was good at ‘cai‘ (pluck) and ‘na‘ (grasp) and Sanda, his tuishou was replete with swift, interlocking rapid-fire attacking techniques; his application of ‘luan huan‘ (scattered circles?) technique, in particular, was matchless. In order to escape the chaos of the Sino-Japanese war, in 1937 M. Hou moved to Baoji in Shanxi to do business. Later, M. Hou was embroiled in some trouble with the police and fought off several policemen armed only with a shoulder pole, after which he immediately fled to Xi’an. After liberation, he worked for the pedicab union. We invited M. Hou to come to Xianyang to teach taiji. Every Saturday and Sunday he would teach taiji, tuishou and sanda in Xianyang Park. When pushing hands, M. Hou’s fajin was swift and crisp; when launching people his movements were light and agile.

When I would push with the older generation of practitioners, even though they didn’t use much force, they had immense internal power, their ‘zhan nian lian sui‘ [stick-adhere-connect-follow] meant that you could neither advance nor retreat. If they drew you in, you had no choice but to come in; if they launched you out you had no choice but to fly. 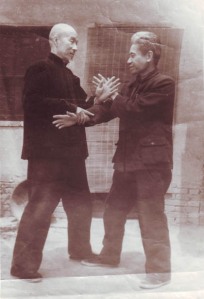 [The famous Zhaobao master] Zheng Wuqing had a disciple called Liu Rui who wanted to test his teacher’s skills。 On one occasion, while M. Zheng wasn’t looking, Liu lauched a palm strike at the back of M. Zheng’s head. All the other students heard was a ‘hmph’ sound from M. Zheng before they saw Liu land heavily on Zheng’s bed, hitting his head against the wall (which later gave Liu a swelling the size of a date). There was another time when Liu wanted to stealthily attack M. Zheng while they were pushing hands: just after they had started circling hands, Liu tried to attack M. Zheng’s ribs, only to hear another ‘hmph’ from M. Zheng. Liu had been hit by a lightning ‘zhuan shen kao‘ (shoulder barge) from M. Zheng； at the time Liu was in a bad way and took a good few months to fully recover. M. Zheng said to Liu “Don’t try full-on attacks during pushing hands, because if you start going in hard and fast I can’t guarantee your safety”. That experience proved to us that you couldn’t touch M. Zheng without warning him first.

There are many similar examples involving M. Hou. I remember on one occasion M. Hou was squatting on the ground playing chinese chess when one of his buddies crept up on him and tried to grab him in a bear hug as a joke. All we heard was a ‘hmph’ from M. Hou as he hit the man with ‘chuan xin zhou‘ (heart-penetrating elbow). The man was knocked to the ground and lay there, winded and ashen-faced. It was only after several minutes of massage and dian xue [pressing acupuncture points] that the man recovered. Afterwards, M. Hou said “It’s very unwise to secretly attack people, even as a joke, because if something goes wrong someone could die.”

One time, I was practicing push hands with M. Hou in Xianyang park on the bank of the Wei River, when I asked M. Hou ‘What’s the application for Shan Tong Bei [Flash Through the Back]?” M. Hou replied: “Shan Tong Bei can be used to deal with attacks from all directions; there’s qin na [locks and holds], cai [pluck] as well as other jins in it.” I then asked: “Why is it called ‘through the back’ then?” I had thought that it referred to ordinary fajin. No sooner had the words left my mouth than M. Hou smothered my hands with his left hand, stuck his right arm through my legs (so that my body was off the ground), and then threw me over his head! Luckily, the sand was very thick where we were standing so I didn’t sustain any injuries, but at the time it made me break out in a cold sweat just thinking about it. It’s even more amazing when you consider that M. Hou was over 70 at the time and I was only 36. It certainly demonstrated the speed, accuracy and strength of M. Hou’s techniques.

Another time, while I was pushing hands with M. Hou I decided to attack him with a ‘ying mian kao‘ (shoulder barge to the face). To my surprise, just before I landed the technique, M. Hou turned his body and with what seemed like a light wave of hands sent me flying diagonally away. M. Hou’s ting (listening), hua (transforming), na (grasping) and fa (launching) had reached an incredible level, he could control the opponent wherever and whenever he attacked.”

Translator’s note: I have abbreviated ‘Master’ as M. in the above article for brevity. Unfortunately I could not find any photos of M. Hou himself on the internet, but for those who can read chinese, Hou Chunxiu’s third son, Hou Zhuanyun has a website here
; otherwise the best resource I have found on Zhaobao taiji in English is this website.